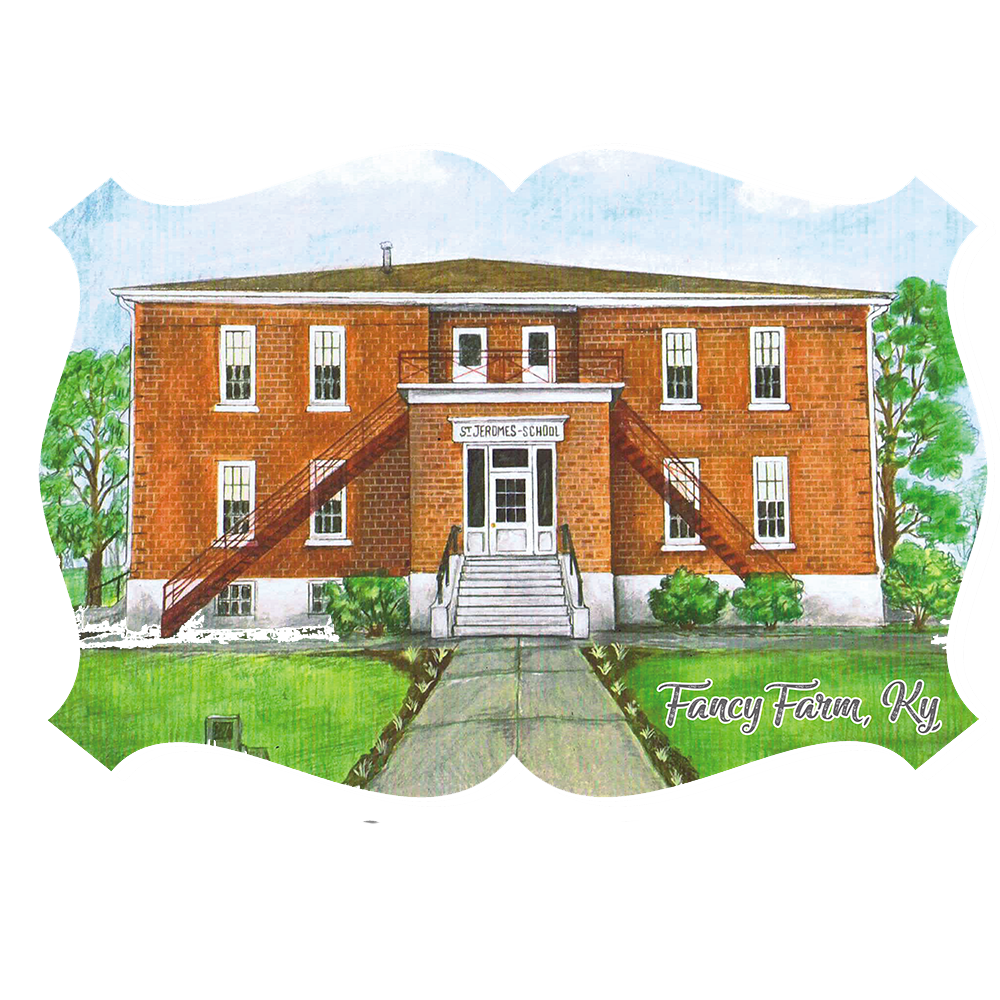 This story began many years ago with a number of Catholic settlers who chose this location to begin to build their futures in this small community.  That community would eventually be named Fancy Farm because of a representative of the US Postal Service who suggested that name for the post office that was to be located there, since the farm where he stayed while visiting the area, the Peebles farm, was so well kept.  Those settlers had a deep belief in Christianity and in 1836 their faith lead to creation of St. Jerome Parish, housed in a wood frame church that the community had constructed.  In the mid 1850’s that church was replaced by a larger brick, all homemade brick, church on the same location.  In 1889 a new pastor was assigned to St. Jerome Parish, Fr. Charles Haeseley, born in Switzerland, December 14, 1855, and destined to be named the “Builder of Fancy Farm”.

In about 1893 Fr. Haeseley directed the parish to replace the 1850’s church with a bigger church that is used by St Jerome Parish today.  Fr. Haeseley instructed the community to dismantle the brick from the existing church and store them and then to bake new brick, about 500,000, to be used to build the new church.  After completion of the new church Fr. Haeseley allowed the community to rest for a while.  Then in about 1908 directed the community to construct a large school that would serve in providing religious and general education.  Again, the community set about baking the brick and cutting and preparing the timber needed to construct St. Jerome School which was completed in 1909.  Again Fr. Haeseley allowed the community to catch its breath before directing them in 1912 to build him a new Rectory using the stored brick that had been dismantled from the 1850’s church.  Each of those three structures share certain construction features, thick foundations and multi-brick thick exterior and interior walls yielding solid structural strength.  With the construction of the present church, school, and rectory Fr. Haeseley became known as the “Builder of Fancy Farm”.  The community construction of these facilities evidences the priorities of the community, being faith and education.

This large school served the community well for religious and public education until 1985 when the students began attending Graves County High School and the lower classes were moved to other facilities the community had constructed in the town.  At that time the old school was reengineered for parish religious education and was used in that manner beyond the year 2000.  The school was used less and less for classrooms but continued to be used for storage for the Fancy Farm St. Jerome Picnic and other parish storage needs but the old school was in a state of continuous decline and disrepair.

At the completion of the Fancy Farm Elementary School the parish had to decide the future and use of the facilities that had been leased to Graves County Board of Education since about 1939.  Each of the facilities, built after the old school, quickly found continued purpose and use by the parish.  The only structure for which there was no clear answer was the old school that had served the parish since its completion in 1909.  That old school building that housed so many memories of all of the kids growing up for all those years, providing classrooms from 1st grade through high school graduation, friendships and relationships developed, basketball games, dances, events, FFA/FHA, senior plays, proms, and graduation ceremonies suddenly might not have a purpose anymore.

Four members of the larger parish planning committee felt that consideration should be given to the value of the old school.  The old school represented a testament to the priorities and values of our ancestors, reflecting their deep devotion to Christian faith and education and willingness to work together to provide future generations with that faith and education.  The old school housed all those memories of the generations who received their educations there, spent all those years of learning who they were and what they stood for, experiencing their many successes and failures, and learning the value of leaning on friends and their Lord.  Those experiences and memories that are priceless and that formed the Christian foundation on which they would depend for their entire lives.

Ultimately after considerable study and fact finding on the feasibility of restoring the old school, the project was approved, work was commenced, and to date the restoration is nearing completion.  The school will continue to stand as a testament to the willingness and determination of our ancestors to provide for future generations’ Christian faith and education and their willingness to work together for everyone’s benefit.

For anyone who has an interest in history, and appreciation for the efforts of past generations who possessed a deep devotion to Christian faith and selfless cooperative work, and appreciate historical facilities as worthy of preservation, please come and visit St. Jerome School and Museum in Fancy Farm, KY.  The School and all St. Jerome Church property is listed on the National Register of Historic Places, by the United States Department of the Interior.